Hi! I thought I would write some interesting stuff about the history of BOL since it’s its one year anniversary today!

Around late 2018/early 2019, I had been on hiatus for my other comic due to wrist injuries for a while and I wanted to come up with something to try and ease my way into comics again cause I totally forgot how to draw them. I was inspired by Sachiko Kaneoya’s depictions of dreadfully done-with-life boys who seemed to always be tired, beat up or bloody, but usually were also in fanservicey situations. 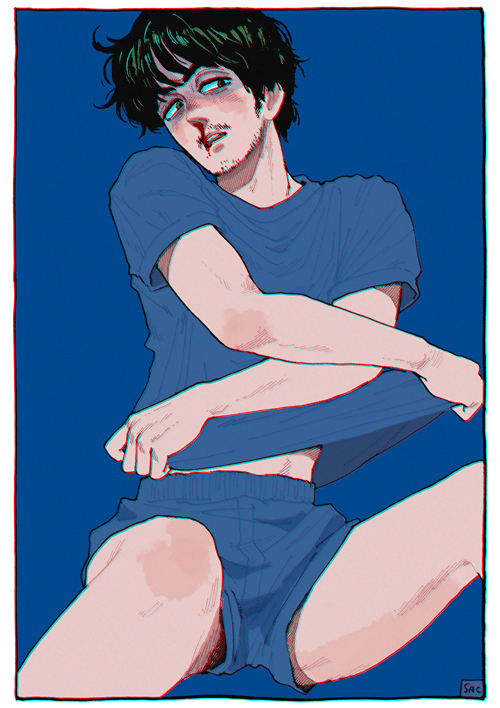 I didn’t think of making a comic at first and just came up with some characters. I had a list of basic traits for them and a lot of them got cut or changed, but some still remain. I’ll go over those in a bit!

In May 2019 I had tabled at ACEN and felt particularly discouraged about myself in general, I was going to quit cons all together but an event sparked me to output the creation of the comic faster than anything I have ever done. Well, I’ll be clear, that event was out of spite, so I basically hate-made the comic. And one month later I went live! Anger is my strongest motivator 😎 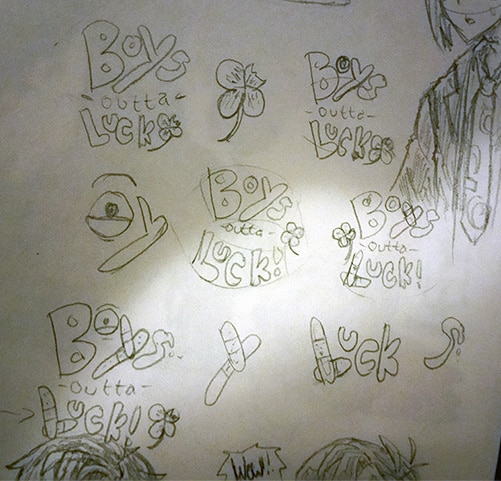 ^ Trying to hammer out the logo!

You might’ve seen the concept art I put in the extras section on the site. (I’m pretty embarrassed for Cellist’s in particular where I couldn’t for the longest time remember which part of the cigarette is the part you smoke from so he’s holding it wrong…) That’s what I started with, Priest’s personality didn’t really change but Cellist was an extremely tough character for me to pound out so he got a lot of changes from when I started to where we are now.

When I started, it was supposed to just be a stupid nonsensical gag comic with characters as flat as cardboard. But, the more I worked on them the more I found myself being attached to them, I fine tuned them and gave them depth. If you take a good look you can see the slow transitions of how the characters look from the beginning of the comic to recent ones. (off topic, Patreon says I might be writing pornographic content because of “gag comic” 🙂 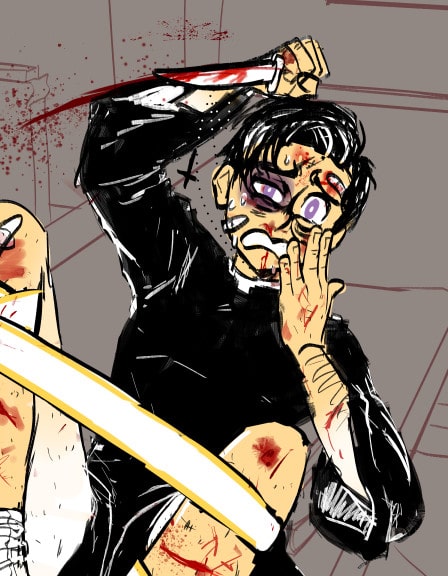 Priest was at first supposed to be very shy but sweet. I coded him as the “Nice one.” Yeah, look where he is now. The complete opposite of shy! Unlike Cellist, he kept most of his traits and I had an easier time expanding on them. Since his character is mostly at his “final form” already he has less growth than Cellist so I did have some trouble with his motivations and what he has yet to improve on as a person.

I drew him of either average or skinny build at first, but after going through his backstory I rationalized that his training with guns probably mean he is physically active, so he is actually very strong. It’s hard to tell because of his robes, but I do draw his arms bigger and his torso is a bit wider versus the first few comics. Most of the change is hidden beneath his clothes, haha.

Also an interesting phenomena, for the longest time I HATED guns and wanted nothing to do with them in my stories, I don’t really know why I wanted to give Priest a gun in the first place cause I hated them so much. I think it was a silly passing thought like “haha he exorcises demons with guns he takes from hammerspace” and I liked it so much that it became a real thing. Anyway, after making Priest I have become a gun-lover hahaha.

In that first picture up there, I drew him in a cassock. But, I wrote down that his pants were always supposed to be pulled down to embarrass him, and it’s hard to do that in a cassock, so I gave him average length top instead. :o) 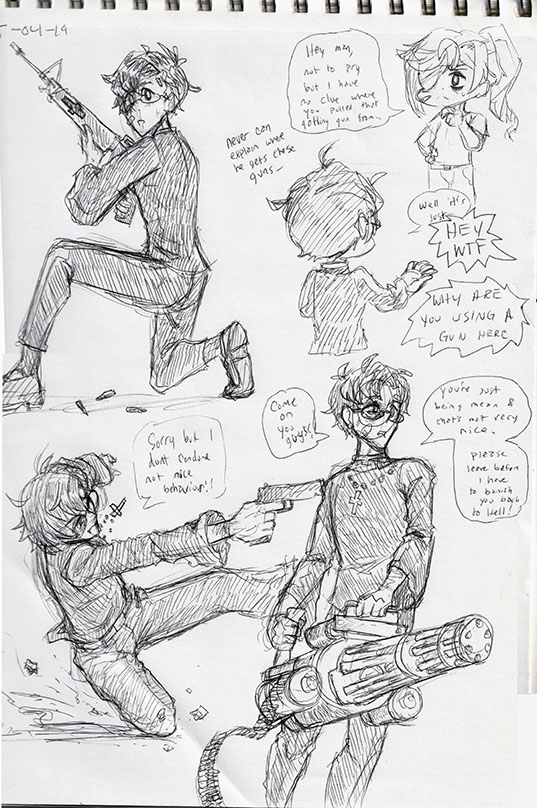 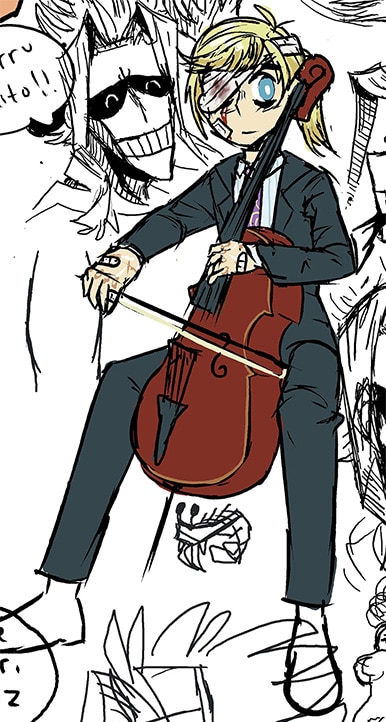 Cellist was the second character I made. I coded him as the “Hot one.” I had a positively dreadful time ironing out his personality and backstory. I kept running into particular personality traits conflicting, I had even made fucking flowcharts for his personality! I filled out one of those dumb 200-questionnaires for him! It was useless!

However I had to just take a step back, strip him of all the bullshit and just look at he is, his core as a person, and then rebuild him. While the core of him is “depressed loser slob who can’t find a gf or a job” all the things surrounding that were confusing me so I branched out from that instead. Why is he a depressed loser. Why can’t he find a gf or a job. I started piecing things together much easily after this approach and now his motivations are as clear as day to me. 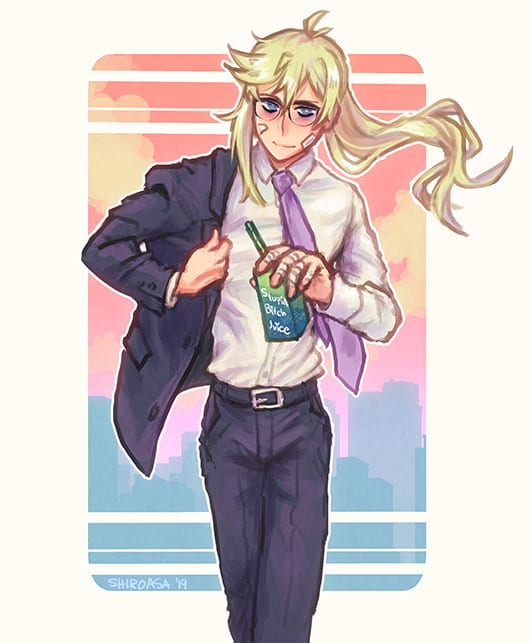 ^ Drinking his drink of choice.

And, as you can tell from the header of this post, he is very different in the first few comics versus now. When I first created him I imagined him as a generic toned hot guy, but I realized, if he is poor and can’t feed himself, how the fuck is he that buff? So he became a heroin-thin noodle man.

…As you can probably also tell. I first conceptualized him as the “hot guy” but he has… not become hot. He has become pretty. Much prettier.  Around October 2019 I decided that I wanted to give him distinct eyes, so I changed the way I drew his eyes three times within a span of like five comics before I decided on giving him slit eyes. 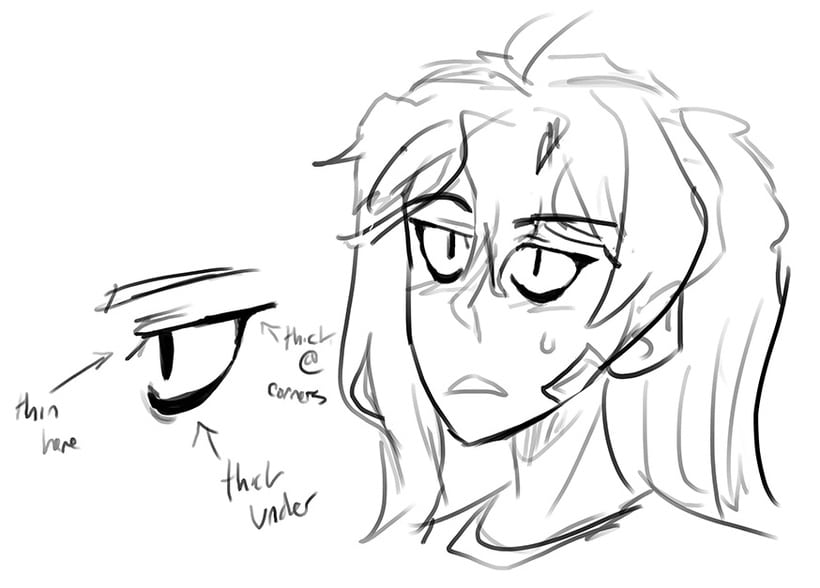 You might think that it is kind of backwards that I chose this type of eye for a character that’s supposed to be a pretty boy. After all everyone knows pretty boys have sparkley big anime eyes that you melt into etc. etc. and it’s rare that I actually draw his iris, true. But I think of Cellist as being very, catty? Cat-like. He has traits I associate with cats (e.g. independence, hot-and-cold affection, standoffish) so I feel that giving him eyes like a cat’s pupil fits him. (Likewise, I think of Priest to have very dog-like traits, such as friendliness and clinginess) Plus I always thinking of him to have a piercing stare, so having eyes like this amplifies it I think. Just isn’t the same when you have round eyes.

Anyway, my goal is to make him more and more pretty… 😉 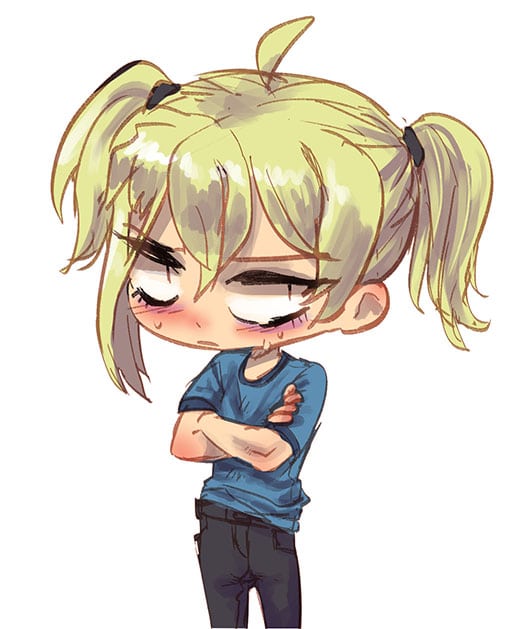 As for both of them, I am trying to make the difference in their physiques more apparent. I am still working on it, but so far I’m happy with what they look like right now.

The way the comic looks has really changed in a year, I’m impressed at my growth. And I’m glad if you got enjoyment out of it. I know that it is kind of a niche comic, but I’m happy if you would keep following it. I also know a 4koma is not really a good way to tell a story lol but I have a lot to say about these boys and their lives so I hope to keep chronicling their stupidity and maybe making you smile or cringe :o)

(Bonus rare Succubus concept art! (that I didn’t even know I had))